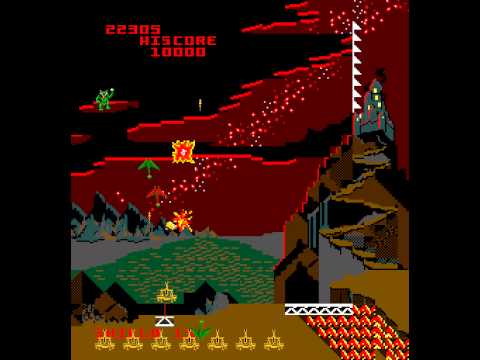 A shooting game where the Rocket Launcher is under YOUR control. YOU make it move back and forth across the screen to launch Rockets that will eliminate your attackers. These attackers are displayed in groups, called ‘racks’, across the top of the screen. The first rack is made up of a small number of attackers. The second rack is made up of a larger number of these attackers. And intermixed with the racks of attackers is a rack with only a single fire-breathing Devil’s head.

The attackers and the Devil’s Head will try to wipe out your Rocket Launcher. If they do, you lose one player. In emergencies, you have a Shield which goes all around your Rocket Launcher for a short period of time. It is activated by pushing the Shield button on the control console. BUT BE CAREFUL!! This consumes a lot of power and will only last a VERY SHORT TIME!

When you complete your Bridge into the land of SATAN, you can cross it and do battle with him. If you win you will be rewarded by increased fire power for your Rocket Launcher. If SATAN defeats you, you lose one player.

Bonus Rocket Launchers are awarded to you periodically throughout the game as you reach or pass certain preselected point values. Each attacker has an assigned point value.

The object of the game is to HAVE FUN while constantly improving your skills as you play, eliminating as many attackers as possible each time to get the highest score.