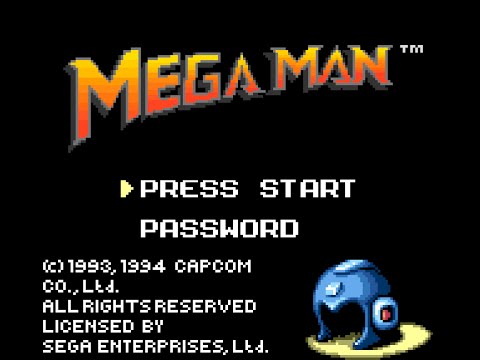 Mega Man for the Game Gear is a game that is a mix of Mega Man 4/5. Some things:
– Star Man is colored green on the boss select screen (what?)
– Bright Man’s weapon is different. Instead of freezing time in short bursts, it acts more like the Gravity Hold or Centaur Flash and damages everything on screen.
– Power Stone is vastly improved because if the shot misses, you can shoot again even if any other stones are on the screen.
-For some reason, Wave Man’s music is replaced with Gravity Man’s music. A snippet of Wave Man’s original tune can be heard in the Game Over screen.
-Quick Man’s stage is brought back as a Wily stage. The lasers don’t kill you in one hit and you can slide, making it a lot easier. You don’t fight Quick Man though.
-The ending stages are kind of weird. The first two (Wave/Toad) take place in Cossack Citadel, then for the last level you go to the Skull Castle, and then after you’ve beaten that, Mega Man blows up Cossack Citadel for the hell of it. WTF?
-Wave Man doesn’t have a weakness.