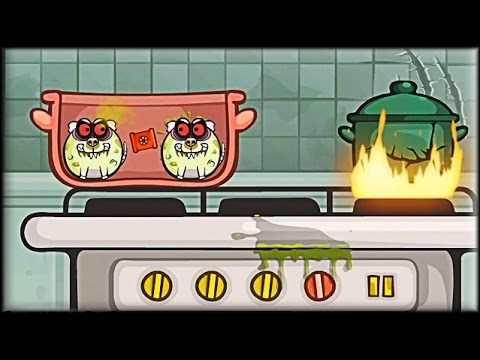 Rats are back to the kitchen once more and they are now turned into nasty zombies that can infect other people. You will need to stop them again in this physics and puzzle game called Rats Invasion 3! The main objective here is to eliminate all the rats positioned on the platforms. Use your cannon and shoot out nuts to break the glasses and other objects. You can also use this cannon to push them on the traps. Aside from the nuts, you can also shoot gas grenades to poison the rat zombies. Once the rats are eliminated, you will automatically access the next level.

Rats Invasion 3 is a fun and casual game about eliminating those pesky rats that you usually find in your house, there’s going to be a multitude of them and you’ll need to eliminate them one by one, it won’t be easy as there are a lot of obstructions but it will surely be fun, you’ll need to take control of a small cannon, and you’ll be armed with different projectiles to use against the rats, like the common bolt that you can use to break glasses and bottles, smoke bombs to choke the rats to death, sticky bombs that can stick to anything in the game, and even poison that can infect all the rats in a group, indeed, you’ll be well armed against those pesky rats, and you’ll enjoy killing them all…every one of them, the game features 25 challenging and fun filled puzzle based levels for you to solve by the way, each one of them designed to test your shooting skills, you’ll need to calculate the angle of the shot as well as its power, and if you’re accurate enough, you’ll eliminate the pesky rats for sure, so can you clear the whole house with the rat infestation?, do you have enough shooting skills to eliminate them on by one?, that’ll be up to you to find out.

Rats Invasion 3 features some really simple but kinda nice graphic and designs, the character designs are cute and nice, the rats kinda looks fat and not very rat like at all, there’s not much detail in them too, they’re just rounded with a set of eyes and ears in them, you can hardly see their feet and tails, environments are also very nice, and although it only features the house as the location of the game, the level designs presented seem to be quite varied as it takes place in different parts of the house, the colors used are cool, the game has very nice color combinations and everything looks really sharp, animation is quite smooth, you can see it when you fire the shots and the movement of the rats when they get hit with the projectiles, the game’s music and sound are quite cool too, music is nice and upbeat and sound effect is also quite cool, special effects are simple though, there’s nothing really special about the special visuals presented, but it still looked kinda nice, overall, it still looked quite pretty with its simple designs and presentations.

Rats Invasion 3 is basically a physics based puzzle game, you’ll fire projectiles from a cannon and you’ll be calculating angles and power for your shots, not to worry though as the game will show dotted lines the the shots will traverse, and you can easily adjust the angle and the power from there on, there are also different kinds of ammo in the game, you’ll need to use the right one on the right rat, depending on the rat’s location and position, control is quite simple, all you need to use is the mouse…or is it a rat?, to control trajectories and power of the shots.

Rats Invasion 3 features some very simple visual designs, the rats look cute though, there are 25 challenging levels in the game, lots of rats to kill and lots of ammo types to use, it also has easy controls for more fun.

Rats Invasion 3 gave me a great time and a good laugh, I enjoyed every level of it, this is really quite fun guys, check it out, you won’t regret it.