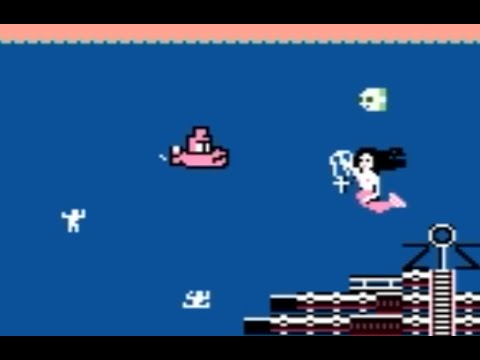 This playthrough shows two rounds through the entire game – the second loop changes the background, many enemy sprites, and becomes much more difficult. I stopped playing after the second loop because there is no formal ending, and I had already broken a million points.

Considering that this is a shooter from the same time that Irem was also developing R-Type, you’d think this one would attract more notice in the retro-gamer crowd, but somehow it remains incredibly obscure. The pink submarine, Sqoon, has to blow up bases built in Earth’s underwater cities (apparently aliens have melted the ice caps) to release imprisoned humans so that you can deliver them to a robotic island. It’s as bizarre as it sounds. The title screen, however, is one of the coolest amongst NES games.

It’s a game that takes a lot of effort to get into – one hit deaths and a super slow weapon fire-rate take some getting used to, but once you do, it’s surprisingly easy. And addictive.

On a random side-note, it’s also a precursor of sorts to Irem’s later arcade game In the Hunt.
_______
No cheats were used in the recording of this video.

NintendoComplete ( punches you in the face with in-depth reviews, screenshot archives, and music from classic 8-bit NES games!

Visit for the latest updates!